Do you hold yourself back? Do you keep your hand down and mouth shut when there’s an urge inside you to step out and to speak up? If you do, you’re not alone! Many of us hold ourselves back on a regular basis and a lot of the time, the reason for doing so is because of the way that we see ourselves also known as our self-image.

Your self-image is the way you see yourself in your imagination. The reason your self-image is so powerful is because your behavior will almost never deviate from this internal map. It acts as a self-fulfilling prophecy, telling you how to behave or how to act consistently with the kind of person you think you are.

I had a client recently who was upset that once again, she was overlooked in a meeting and wasn’t asked to contribute. She had lots of ideas and thought that her ideas were much better than some that were presented so of course she was pissed off! ‘This always happens to me’ was a phrase she used over and again. We quickly discovered that is that she has an image of herself as someone who would never raise her voice over others to be heard, she considered it to be rude and she wasn’t a rude person. But the fact was that no one at that meeting was personally asked to contribute. It was put to the table and the rest of the attendees got involved, gave suggestions and passionately talked over each other! My client felt hard done by because she wasn’t asked. Her self-image of ‘not being a rude person’ held her back.

We had to work together to help her overcome that, to be confident and be able to find a way to contribute that would be comfortable to her. She decided that she would raise her hand, it was simple but the effect was powerful. It became her ‘thing’. It got people’s attention and when she spoke, everyone was respectful and listened to her. Her confidence has grown since then and she’s actually encouraged the entire team to follow her example and listen to each other. We didn’t change her or turn her into someone she wasn’t, we worked on what worked for her, built her confidence in her ideas and abilities and we also worked on personal responsibility – that it was her responsibility to make sure she was heard. 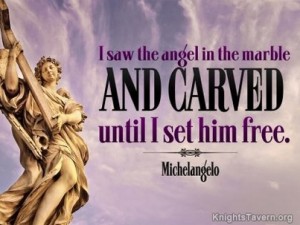 There is a story that when Michelangelo was asked how he carved such beautiful angels, he replied, ‘I see the angel in the stone, and I chip away at everything around it’. Changing your self-image is a lot like that! I don’t want you to try and be someone else, I want you to recognise the magnificence of who you really are, what you have to offer and learn to show that to the world with confidence and a smile!

This is one of my all-time favourite poems and I wanted to share it with you this week. Just imagine if we all lived our lives by the message in this? What a difference it would make to the world!

Our deepest fear is not that we are inadequate.

Our deepest fear is that we are powerful beyond measure.

It is our light, not our darkness that most frightens us.

We ask ourselves, Who am I to be brilliant, gorgeous, talented, fabulous?

Actually, who are you not to be?

You are a child of the World.

Your playing small does not serve the World.

There is nothing enlightened about shrinking so that other people won’t feel insecure around you.

We are all meant to shine, as children do.

We were born to manifest the glory of the World that is within us.

It’s not just in some of us; it’s in everyone.

And as we let our own light shine, we unconsciously give other people permission to do the same.

As we are liberated from our own fear, our presence automatically liberates others.”