Money is a very personal topic and I know that many of us don’t like talking about it! Why? Cos we feel like we don’t have enough! It’s a major stressor for so many people and you know what, there’s even a name for it- Scarcity Mentality! I think we’re all guilty of having a scarcity mentality- it’s that feeling of not having enough and not being enough. Most of the time, I work with women who feel like they aren’t enough- not good enough, smart enough, brave enough etc but today I want to talk about scarcity mentality in relation to our finances.

January is a major month for money blues and scarcity mindset, there’s no denying that! Over the past few weeks, we’ve spent most of our cash on gifts, cards, food, going out, catching up with friends and we generally have had a good time. We look forward to the new year with high hopes and ambitions of what we’re going to change but then, January comes and we feel shit.

Why? Because it’s a long 4 weeks to payday so January can be like hell. We feel like we haven’t enough, we’re stressed and worried about our finances and we feel insecure. Money worries is one of the biggest reasons why New Year resolutions fall flat on their face before the end of January! It’s a major stress point and has an enormous impact on almost every aspect of our lives! When we’re stressed or worried in one area in our life, it can seep into other areas and then all of a sudden we’re comforting ourselves on the couch stuffing our faces with chocolate or alcohol to try and numb the feelings of anxiety.

So, what do we need to do? We need to get in control and confident with our finances. Now.

We will be dealing with money for the rest of our lives and if it’s a source of stress for you now and you continue to ignore it or avoid it, it’s not going to get better. Guaranteed.

So, let’s stop pretending we are ostriches and get our heads out of the sand! Here are a few top tips 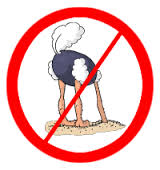 to break out of your scarcity mentality!

When you’re handing over money to buy something or pay a bill, say to yourself ‘there’s always more where that came from’. It might sound silly but there’s so much power in the words that we say to ourselves. It’s the truth. There is always more- you may not have it in your purse right now but you are capable of creating more, earning more. How much crap have you got in your house that you don’t use? Do a car boot sale! Clear out the mess and make a few bob!

We need to have fun, relax and treat ourselves. It’s vital and non-negotiable if you’re working with me! So, if you’re holding back and saying you can’t afford to go to the cinema or have a drink after work with friends, then you need to start a fun fund. It’s a savings account or piggy bank that has money set aside that is to be spent on fun and fun only! Having fun and treating yourself well is one of the key ways to break out of scarcity mentality!

Anytime you catch yourself worrying about money or stuck in scarcity mentality- I want you to give some money away. Donate to a charity or cause that you feel connected with! Another way to spread the wealth is to be generous with your friends and family. It’s a great feeling to say, ‘I’ll get this’ when you’re out with people you care about. Even if you just got a pot of tea and a cake to share!

You probably know this already but almost half the world, over 3 billion people live on less than €2 per day. 80% of all of the people in the world live on less than €7 per day. That is the reality. Now, I’d be pretty confident given the fact that you’re reading this that you don’t fall into either one of those statistics. I get that you want more and that’s fine. If you have more money and resources, I know that you would spread the wealth and everyone would benefit! But we have to realise that true abundance starts with appreciating what we already have right now. You have a roof over your head, clean water, clothes and food. You are already financially abundant!

“Be thankful for what you have  and  you’ll end up having more. If you focus on what you don’t have, you’ll never have enough.”- Oprah

I hope you enjoyed this weeks issue of Progress! I’m really curious as to what you think of this blog! Have you noticed that you have a scarcity mentality? Have you found a way to break out of it? Come over to the facebook page and share your story!