What do I tell my daughter?

I lay awake last night watching my gorgeous 14 week baby girl sleep. Before that moment, for most of the night I had been glued to the news and social media watching events unfold in Paris.

While there is no denying the ugly truth of what happened in Paris, I chose to shift my focus away from the hatred and ugliness and towards Parisians honouring the values of their country yet again.

‪#‎Porteouverte‬ appearing over social media- people opening their doors and homes to those in need in the city.

The football fans singing their national anthem as they were evacuated from stadium.

Taxi drivers around the city bringing people to safety out of kindness and solidarity.

Queues of people waiting in line to donate blood.

People asking ‘what can we do to help?’.

One man pulling up outside the bataclan theatre today with his piano and without words, playing John lennons ‘imagine’.

Cities all around the world changing the colour of their national buildings in support of the people in France.

This is the world I belong to and will teach my daughter to belong to. A world of loving, kind, compassionate and gentle people. I refuse to allow a small number of misguided souls change my world. Now, more than ever is when resilience, loving kindness and compassion is needed. Xx

Yesterday was messy! I felt all over the place, like I didn’t have a minute, loads to do but no head space to even make sense of it! I was snappy and mean to Colm and myself- the negative self talk was quite loud! I was even creating extra things to do that weren’t important at all- just to add to my sense of ‘I’m shit and everything is crap’ mood!

Colm was heading to a 40th and I was supposed to hang out with my cousin and sis last night but I text to cancel (even though I really wanted to go!!)

My sis responded saying she understood, to take it easy and have early night as I have a 7 week old baby to look after. I responded with a sad face emoji..

She text me asking ‘from a self love perspective, what do you want to do?’. Great question and I knew the answer.

I told her I would be there- not sure what time but I would.

She said they’d order food for me and have it ready when I got there. Things were picking up!

I went upstairs, put the baby on the bed, hugged my hubby, cried and then jumped in the shower.

It’s incredible the difference it makes when you change your physical state- instead of bitchy and cranky- I let myself be vulnerable, cried and had a hug. Instead of tense neck and shoulders, I let the warm water soothe me.

Ten minutes later, we were ready to go and I had a lovely evening with my family! I had delicious chicken with cashew nuts and steamed rice from the local Thai place, a giant mug of tea and a very generous helping of dairy milk Oreo! (Yum!!)

I got home and Sarah was still asleep so I had a bath with bubbles and lavender oil and then got to bed feeling happy and grateful!

A few years ago, I wouldn’t have been able to change my emotional state and I would been in a pisser for days. It’s taken a long time but I just wanted to acknowledge progress. Life can be crappy and messy and hard and tense and you can struggle with feeling shit and out of control and that’s ok!

But if you want to get out of it, there’s always things you can do!

1. Change your state- shower/cry/hug someone/listen to some music, move your body, go for a walk, eat something if you’re hungry!

2. Do a brain dump! Pen and paper and just write! Get everything out of your head, you don’t have to take any action on what you write down- just get it out of your head!

3. Practice self love- in the midst of the crankiness and pyschoness – consciously do something kind for you. It could be mindfully making yourself a cup of tea- anything at all! Just be kind to yourself

4. Sleep!! Get yourself a decent night sleep! Change the sheets, get to bed early with a good book and hot chocolate! Sleep is a miracle worker sometimes!!

How bout you guys? When’s the last time you got yourself into overwhelm and what did you do to get yourself out of it? 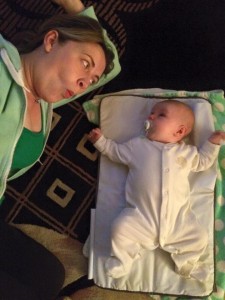 Welcome to My New World!!

I’ve been toying with writing over the past few weeks but tiny time and my stubbornness/reluctance to get into a routine had prevented me from doing so! Anyways, I’m back and so happy to be back!

The last few months have been amazing but at the same time, they’ve been really tough. I wrote an ezine back in May saying I was struggling with being pregnant- embracing my changing body and moods was just not coming naturally to me and I found it to be hugely challenging – physically, emotionally and mentally and guess what, it got tougher!

It was such a huge change to my life and I regularly found I was getting angry with myself because I was physically tired, I was annoyed at myself because I was struggling and found it painful to walk, sleep, go up the stairs. I was looking at all these other pregnant women around (they were everywhere!) and I was comparing myself to them and finding myself seriously measuring short! They were doing yoga or Pilates, getting their nails done, looking glowing, colour co-ordinating the nursery whereas I was having a panic attack going into the hospital for a scan.

l I found it very difficult to ask for help and what was crazy but interesting was that if a stranger in the supermarket offered to help me carry my bags to the car (which did happen on many occasions), I gratefully accepted and was so thankful. If my dad/sister/husband/friend offered to help me with anything, I resisted and shot them a look and said ‘I’m grand, I can do it!’ I was secretly hoping they’d just become mind readers and do the things for me without me having to ask or without me having to accept their offer of help!!

The reason was because of my own self image- I see myself as strong, independent, a tough cookie blah blah blah. But the truth was, for this period of my life, I felt completely out of control and it really frightened me because it reminded me of my past. I had worked so hard for years to manage myself well and manage my emotions and I could feel myself slipping back into old habits, thoughts and behaviours- all of them spiralling me downwards into anxiety and panic!

I decided to seek out some help and went to a counsellor once a week from June to August. Best Decision Ever. It really helped to get stuff off my chest, to talk through my fears and have that safe space to do that. It also gave me the courage then to open up to family, friends and Colm and say how I felt and to learn to ask for help. I had been afraid that they would judge me, think I was weak or just looking for attention. Well, I was wrong. The first thing that happened was I heard a resounding, ‘Oh my god, me too!’ from all my mama-bear friends.

I thought it was just me but it isn’t. Funny that!

Small tweaks and changes to my behaviour on a daily basis. I started saying no to demands on my time and energy and I started saying yes to help. It was still hard but definitely an improvement on how I’d been carrying on previously! Sarah ended up being 10 days overdue and I have to admit, the last 2-3 weeks and those extra 10 days was the best time of my pregnancy and I really enjoyed it!

This is all quite personal but the reason I’m sharing it with you is because it was tough and messy and chaotic and lonely and full of struggle until I allowed the people close to me see the truth, my truth. I stopped trying to be who I thought I should be and I got real, vulnerable and yeah, there were lots of tears but then it opened up the path to connection with the people I care about.

It’s tough to let people see you in struggle. It’s tough to even admit in the first place that you’re in struggle. But when we face it and look it in the eyes instead of trying to dress it up in fancy shoes trying to make it look pretty, then we can deal with it. When we open ourselves up to the support that we need, we allow ourselves be human, to be real.

The emotions surrounding this experience were not new to me. It was completely different circumstances but it felt very similar to when I struggled throughout my late teens and most of my twenties. I had felt lost, confused, petrified, trying to be perfect, not letting anyone see the real me for fear they would recoil in disgust at my wretched weakness/laziness/not good enoughness- take your pick! I was my own worst enemy and biggest critic. I had negative and self destructive tendencies, habits and addictions. Most of you know my story anyway, I was in a really bad place at 25- dumped via text, jobless, broke, had to sell our family home, I was overdrawn in my overdraft with credit card maxed, no idea what I was doing or where I was going. The future looked pretty bleak.

The way I broke through all that was (eventually), asking for help, deciding what my big picture was going to be and taking small but consistent steps towards what I wanted. I got clear, and brave and I got going. I hired a life coach (I’ve almost always worked with a coach since then- though I wasn’t during my pregnancy! haha, penny drops!) Anyways, I’ve worked my ass off the past 6 years to create a new life for me, and the ‘dream or fantasy life’ is actually a reality now!

In the grand scheme of things, it may not blow anyone’s socks off but it totally does it for me! I have work I love which I find meaningful and fun, I have my own home, I have a garden and a dog, my own business, a sexy, sweet husband that I adore and who I know adores me- he knows how I take my tea, he knows the little things everyday are more important than grand gestures once in a blue moon, he still holds the car door open for me every time I get in, I have a gorgeous baby girl who is 12 weeks old now and I get to do what I love, be home based and spend time with her, I have an amazing extended family, soon to have no consumer debt by the end of this month so I’ll just have my mortgage. I’m happy being me.

If I go off course again, which I’m sure I will at some point- I just need to remember to start from where I am, allow the real me to be seen and heard, ask for help, get clear, get brave and get going.

You and me, we’re exactly the same.